Ultra-Early Soybean Yields and Light Interception Among 3-, 5-, and 7-Leaflet Genotypes. 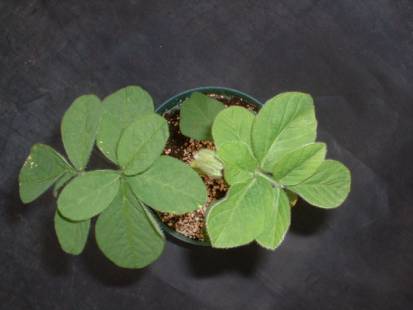 Drought is typical in the Midsouth during flowering and seed filling stages for soybean.  Early-maturing soybean cultivars can be used to substantially decrease irrigation, but they require high population densities for full light interception.  We hypothesized that 5- and 7-leaflet soybean genotypes would accumulate more light than 3-leaflet near-isoline genotypes at similar population densities.  The objectives of this research were to: (i) measure and compare cumulative intercepted photosynthetically active radiation (CIPAR) from emergence to the full seed stage (R6) of development, (ii) determine population densities required to give full yield potential, and (iii) map the gene conferring the 7-leaflet trait.  At Fayetteville, AR, plots for experimental lines from MG 00 to II were drilled at seeding rates ranging from 4 to 50 seeds m-2.  The fraction of light intercepted (FLI) by soybean plants was measured using digital imagery.  The FLI values were used to estimate daily light interception, and these values were cumulated to determine CIPAR.  Multiple regression analysis predicted that for MG 00 cultivars, 5-leaflet genotypes had the highest CIPAR values.  For MG II cultivars, CIPAR values for 7-leaflet genotypes surpassed those of 5- and 3-leaflet genotypes.  When data for 3-, 5-, and 7-leaflet genotypes were combined, yield response to CIPAR was described well (adj. R2 = 0.68) by an exponential equation.  This exponential equation predicted that 90% of the asymptotic yield (419 g m-2) would be reached at 650 MJ m-2 of CIPAR, regardless of leaflet number.  An SSR marker was putatively identified and associated with the 7-leaflet trait to the B1 linkage group.  This research indicates that multifoliolate soybean varieties may be useful for reducing plant populations required in early season soybean production.

Back to The ASA-CSSA-SSSA International Annual Meetings (November 12-16, 2006)